Scenes Next:
The Player

A scene is a single screen of your game, it can contain multiple actors and triggers. A game is typically made-up of many scenes connected together with triggers using the Change Scene event.

Click the + button in the Editor Tools and select Scene from the menu. Click on any empty space in the Project Viewport to place the new scene.

You can use the Editor Sidebar to give your scene a name and a background from your project's assets. See the documentation for Backgrounds for more information on adding background images.

Clicking the Parallax Toggle Button to the right of the Background Selector allows you to turn on parallax mode for the scene. When parallax mode is enabled you can split the background into up to three slices which can be modified to scroll at different speeds as the camera moves in game. 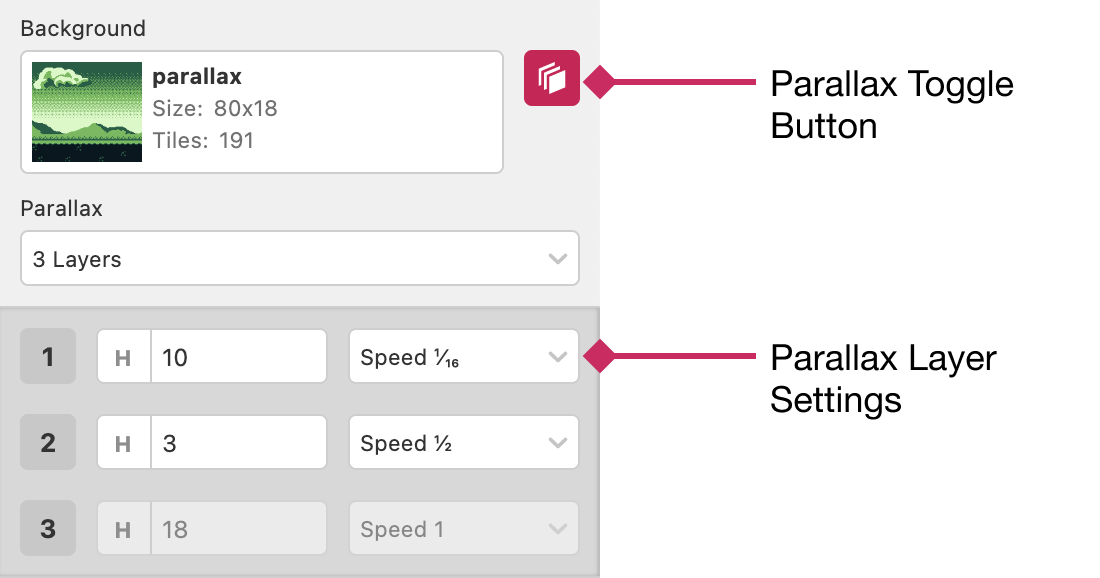 Scenes can contain an On Init script that will be called as soon as the scene is loaded in game. You can use this to do things like playing music as the scene loads, configuring events to happen on button presses, initialise actors based on the values of variables, and much more.

You can also define scripts to call when the player collides with Actors that have a Collision Group set by clicking the On Hit tab and choose a collision group.

To start building a script, select a scene, click the script type you want to edit and click the Add Event button in the Editor Sidebar to open the event menu. Select an event to add it to the script.

For more information see the documentation for Scripting.

Adding Collision to a Scene

Select the Collision Tool from the Editor Tools. There are 6 collision types that can be added.

Each tile can hold a maximum of 1 ladder and 3 collision sides. Adding 4 collision sides will replace the sides with a single solid block. Ladders will not replace existing collision when placed on top of another collision.

Select the Colorizer Tool from the Editor Tools. There are 8 palettes types that can be added to a scene with Color Mode enabled. Palettes can be adjusted in Settings. Note that the 8th palette in a scene will also be used for Dialogue Windows and menus.

The palettes used in the Colorizer Tool can be swapped out for existing palettes (such as the UI palette) by long-clicking on a palette.

For more information about the drawing mode used for the Colorize Tool and the Collision Tool, see Keyboard Shortcuts.

There are several limits that GB Studio has put in place to keep game performance consistent, and to minimize visual issues.

Each scene can have a maxmimum of 20 actors, and 30 triggers, and between 96 and 64 sprite tiles depending on the complexity of the background used. You can check this information by selecting a scene and looking for the gray bar under your scene that reads: A: 0/20 S: 0/96 T: 0/30. The letters on this bar represent the following:

Each scene can have a maximum of 20 actors. Ideally, there should never be more than 10 actors within a 20 x 18 tile boundary, equivalent to 160px x 144px. Clustering more than 10 actors together in a scene will cause some actors to become invisible in-game. GB Studio will warn you if it thinks this will be the case for a scene: 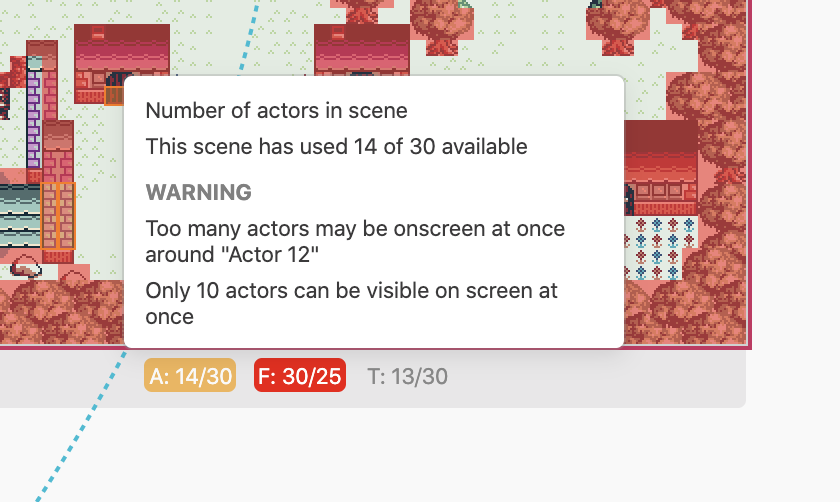 You can address this message by moving or deleting actors so no more than 10 will be seen in a 20 x 18 tile boundary. You can use the Eraser Tool to delete actors. Actors will still become invisible if more than 10 actors move into the screenspace after the scene starts.

Each scene can have a maximum of 30 triggers. You can use the Eraser Tool to delete triggers.