Scripting events allow you to control parts of your game based on interactions from the player. They can be used to connect scenes together, change variables, give dialogue to characters, and more.

Scripts can be added to scenes, actors, or triggers. Selecting one of these objects will update the World Editor to show the script of the selected object in the Editor Sidebar.

To start building a script, select an object and click the Add Event button in the Editor Sidebar to open the event menu. Select an event to add it to the script. The topmost event is the first event to be run for that script.

After clicking the Add Event button, a menu will appear to choose the event to add. If you start typing you can filter this list or you can click through the menu find what you're looking for. Click an event or press the Enter key to add the highlighted event to your script. 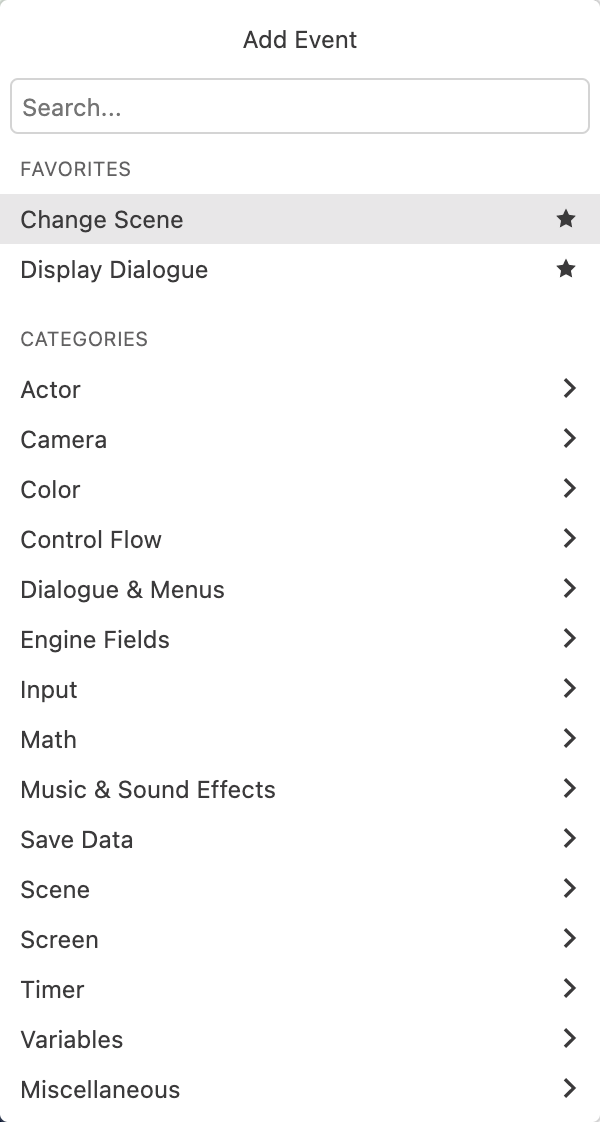 You can choose a number of events to be favourites, causing them to appear at the top of the Add Event Menu. To favourite an event, hover over the menu item and click the Star button or press the Tab key.

To copy an event, click the down arrow next to an event. All scripts have this same down arrow for copying/pasting. Clicking the down arrow on another event allows you to paste the clipboard event either before or after the selected one. You also have the option to paste the values from the first event into the second.

There are multiple script tabs to choose from the Editor Sidebar depending on which object you have currently selected.

These scripts can be accessed in the Editor Sidebar by selecting a scene in your project.

These scripts can be accessed in the Editor Sidebar by clicking an Actor in your project.

These scripts can be accessed in the Editor Sidebar by clicking a Trigger in your project.